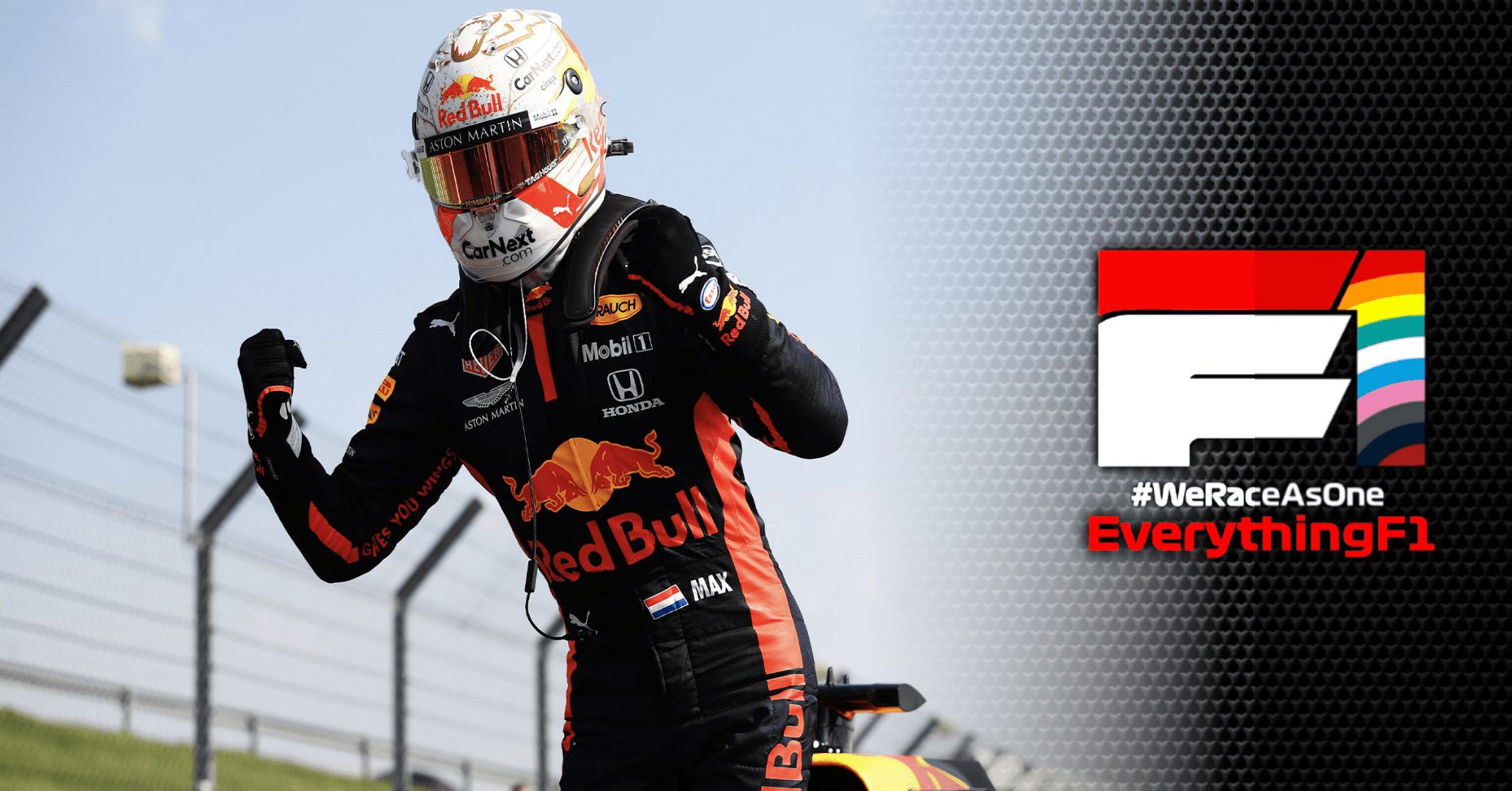 Max Verstappen wins for the first time this season, while Mercedes feel the heat.

What a difference a week makes. This weekend it was the second of 2 races held at the Silverstone Circuit. This weekend is the 70th Anniversary GP, the first Grand Prix in F1 not to be named after a geographical location.

Nico Hulkenberg returns to the paddock for Racing Point after Sergio Perez remains sidelined with Covid 19.

With last weekend’s tire issues still at the forefront of everyone’s mind, Perelli concluded that the issues were due to extremely long use on a track that punishes the tires, with the C2,C3 and C4 compounds being used this weekend (one step softer than the previous race) with higher minimum tire pressures and soaring temperatures throughout the weekend, tires are going to play just as much of a part in the race weekend, albeit less dramatic.

FP1 was a pretty standard affair. Although Leclerc and Verstappen and Kimi Raikkonen and Verstappen got a wee bit too close for comfort during the session.

Vettel’s issues with the SF1000 continued after a small of road excursion caused the German driver to back off.

Mclaren drivers of Sainz and Norris finished outside the top ten, with suggestions from the team that the car would not be as good as the last race due to the softer tires.

At the top of the timing sheet was Bottas who finished ahead of his team mate Hamilton. George Russell and Nicholas Latifi in the Williams did well, showing that the Williams car to be competitive.

Free Practice 2 was a bit more dramatic as Sebastian Vettel’s car ground to a halt with a failure with either the engine or the gearbox.

The front of the timing sheet were again dominated by the Mercedes pair, this session it was Hamilton who would come out on top. Racing Point are starting to show some true speed in the RP20 with Stroll finishing the session in 5th and stand in driver Hulkenberg with and impressive 6th

The session was ended with 5 minutes left after Antonio Giovinazzi’s Alfa Romeo ground to a halt.

On to the final practice session, the Ferrari cars were both fitted with new power units after Vettel’s failure at the end of FP2.

The Mclaren of Lando Norris jumped to the top of the timing charts with an impressive lap, Mercedes would head back to the top by the end of the session.

The qualifying session started in its usual 3 sessions with the first session knocking out the slowest 5 cars. One incident of note in this session was between Ocon in the Renault and the Williams of Russell, on board footage showed that the Renault had impeded the Williams car, Ocon would receive a 3 place grid penalty from the stewards after the session ended.

At the end of Q1 Kvyat, Magnussen, Latifi, Giovinazzi and Raikkonen would all be eliminated. Kvyat looked set to head to Q2, however his fastest time was deleted for exceeding track limits.

at the end of the second session we had another 5 out of the top 10 shoot-out, the drivers were

Another miserable qualifying for Sebastian Vettel who can only manage 12th in the SF1000, Carlos Sainz in the Mclaren will be disappointed in 13th after such a good start to the season.

it was a fight between the Mercedes cars to get pole, but who would get the remaining 8 places in the session, the Redbull cars will be hoping to get the second row, Racing Point will be wanting to show how good the car is.

Bottas, who had just signed a new contract with Mercedes for the 2021 season, knicked pole from Hamilton by 0.063 of a second, a great drive for the Racing Point stand in Nico Hulkenberg who gets into P3, his best Qualifying position since Austria 2016.

The Top ten were

The race stated with Hamilton and Bottas fighting for the lead, Verstappen jumps Hulkenberg before the first corner.

At the back of the pack someone had spun, it soon became clear that it was the Ferrari of Vettel. Did he get tagged and sent of the track? The replays showed that he had lost it on his own, taking too much kerb and sending the car off the track. Fortunatly for Vettel he was able to rejoin in last place.

As the race settled it became pretty clear that Verstappen and Redbull had played a blinder with the strategy, they were the only car that started on the Hard tire, he was set to jump the Mercedes cars.

What was surprising, was how the Mercedes cars were struggling to deal with the tires and the higher temperatures.
Verstappen was called into the pits for a set of Medium tires and was duly passed by Bottas, however the Redbull driver, with a faster and newer set of tires re passed the Mercedes in only a handful of corners.

While this was going on the other Redbull of Albon was having a great race after qualifying in a poor 9th he was putting in a great performance passing the Alfa Romeo of Raikkonen and Gasly on the outside, showing some amazing race craft and commitment. That is going to do wonders for his confidence. He would finish an impressive 5th and was an outsider for driver of the day.

Danny Ricciardo will be kicking himself after a decent but unspectacular race spun off the track losing a hand-full of positions. Renault will be wondering where the race pace went to after a good Qualifying they were pretty anonymous in the race.

The Ferrari cars of Vettel and Leclerc had to very contrasting performance, Leclerc managed to get a pretty awful Ferrari car into 4th place, while Vettel struggled down at the rear. At one point Vettel was heard on the team radio making it clear that the team had messed up the strategy. A very public condemnation of the team.

The Vettel/Ferrari divorce is going to get very messy.

“It is in the gap that we didn’t like. We spoke about it this morning. I’ll hang in there, but you know that you’ve messed up.”

Sebastian Vettel Radio message to team during the GP

The 70th Anniversary GP was a race for the purist. It was a game a strategy, taking chances and trying something different.

The making of this race was the change in the tire compounds. With the compounds being that one step softer, it forced the teams to go for a 2 stop race, but with different options.

Redbull were the only team to set a fast time on the hard tire in Q2 ( the tire that the team would have to use if they qualified in the top 10) this was a master stroke, giving them the edge over the all conquering Mercedes cars.

Mercedes will be searching for answers, they could not handle the heat, effectively boiling their tires and ending any chance of a win.

We all know that Lewis Hamilton loves to complain about tires, he usually spends about 2/3rds of the race complaining that his tires are gone, then he fires in the fastest lap of the race on the final lap. This weekend, he was right they were gone and with that the chance for an undefeated season for Mercedes.

Tires are going to play a part at the next race in Barcelona, with tempatures set to be around 31 degrees celcius for the majority of the weekend. If Redbull can pull another win can they get back into the fight for the championship?